I have always been afraid of heights. As a little girl, I remember one time crying when I was pushed too high in a swing. That and the fact that swinging made me sick. So when I grew older, I could not understand the fascination people had with roller coasters. They wanted them faster, higher, go upside down, you name it. And people thought it was fun.

I decided my senior year to ride a roller coaster. If that many people thought it was fun, then it must be fun, right? I was visiting a college that fall for college view weekend. On Saturday we went to Magic Mountain. Everyone was excited. That’s when I decided I would do it. I would conquer my fear of heights.

I lined up with everyone else for this huge, fast, go upside down, painted in brilliant red roller coaster. As we snaked our way to the front, my stomach began to twist into a knot. The closer we drew, the more my insides coiled. But I was determined to do this. So when it came our time, I belted myself in with everyone else. And off we went.

I thought I was going to die of shear panic as the roller coaster cranked its way to the top. Then down we went. I closed my eyes and prayed the entire way that I would make it off alive. I didn’t scream, I’m not a screamer. When I’m afraid, my brain shuts off. Maybe that will save me someday if zombies attack. They will think I’m brainless 😛

Anyway, I did survive. I stumbled off the roller coaster, clung to the railing and flung myself onto a bench. It took all my strength not to hurl all over the place. I sat there a good 5 minutes while the other students who were along for the college weekend waited. I finally looked up and gave them a weak smile. I spent the rest of the day watching others have fun on roller coasters and swore I would never ride another one.

Unfortunately, life sometimes feels like a roller coaster. I see the unknown and I panic. I want to get off the ride, but life keeps going, pulling me to the top. Then down I zip, through valleys of darkness and over tops of dreams. Half the time I have my eyes closed, praying I’ll make it through. Other times I feel sick.

But one thing I do know: while careening through life with my lips flapping in the wind, I’m safe. The roller coaster is not going to fall apart. I sometimes think it will. But it won’t. Because God is right next to me. And He oversees the whole thing.

When I remember this, I’m able to relax a little. I open my eyes and watch the sights flash by. And I finally enjoy the ride. 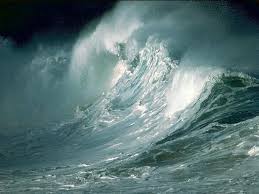 The Christian life is like walking on water. We see Jesus and He beckons us to come out and join Him in faith. So we do. We get out of the boat and low and behold, we are walking on water! Amazing!

But then the waves of life start to pick up. They climb higher and higher as the sky grows dark and the wind whips the water into a frenzy. Suddenly Jesus looks small compared to the things we fear in life:

I just got my paycheck and its not going to cover the bills this month.

My husband said he met someone else and no longer loves me.

Its cancer and I only have 3 months to live.

The medical bills are more than I make.

My teen daughter is pregnant.

No one will hire me.

I’ve felt that panicky, drowning feeling lately. I’m looking for Jesus, and I know He’s there, but right now, my life feels like a hurricane. I’m having a hard time setting my eyes on the small image of Jesus walking towards me on the water.

Faith is easy when the waters are calm. But when lightning flashes and the wind howls and the waves of life are higher than my head, faith for me is very, very hard. And when I feel like I’m facing the waves alone, they can overwhelm me.

Instead, we find a firm hand pulling us up and a face to look upon rather than the storm. And in my case, a reminder not to have so little faith because even the winds and waves -and life- obey the one who can save me.

I remember the day when I realized I had no faith in God. We had just moved to Portland a couple weeks earlier and found out we were pregnant. Prior to this pregnancy I had gone through a devastating miscarriage and was still feeling the repercussions from it. I feared I would lose this baby too.

We had no medical insurance and were in the midst of trying to find some. Unfortunately, my status as expecting mother made me an existing condition so no one would take us. I finally went to see a doctor as the second trimester approached just to make sure everything was all right. That’s when we received the big news: you’re having twins!

Now we needed medical insurance more than ever. I knew a twin pregnancy would not be normal. Finally we found someone who could help us out. Then the bomb dropped. We had to get the paperwork in that day in order to get the insurance because our 60 days was about to elapse (for those who have never had to fill out the paperwork for private insurance, they can make doing taxes look easy lol). Of course, we found that out only a couple hours before the deadline.

With Dan busy with his new job and me trying to move into our new house, juggle two toddlers and deal with twin size morning sickness, I felt something snap inside of me. We weren’t going to make the deadline.

Suddenly I saw our future loom in front of us, full of medical bills we couldn’t possibly pay. And in that moment I realized something else: I didn’t believe God would come through for me. I stood there, staring at the wall and felt the truth of that thought shake me to my core. I had no faith in God.

If you had asked me before that moment, I would have said of course I have faith in God. But now I realize that for years I had worked under the subconscious impression that everything happened because of hard work with a little luck thrown in. I had always been able to take care of myself.

But this insurance situation was way out of my hands. I could not work hard enough. Actually, I couldn’t work at all, not with two little ones needing me at home and two more on the way.

I felt deep shame when I realized I had no faith. What kind of Christian was I? Little did I know that moment was the beginning of God tearing away all my securities until all I had left was Him.

God did come through for us. The paperwork made it in minutes before the deadline. And as a cherry on top, we had a pretty uneventful twin pregnancy. But God wasn’t done yet. My faith muscles were weak. They needed to be trained. So a year later, Dan lost his job.

That story is for another day. But during that dark year, my faith muscles were worked out to the max. Everything I had put my security in to save me fell through. We had no home, no close friends, not even a church family. All I had was God. And He showed me he could be trusted. No, He didn’t come through in the way I thought he should. But he always came through.

My faith had grown enough that a year later when my son had to be life flighted to Portland, I had someone ask me how we were going to pay the medical bills. I didn’t even blink when I said God knew this was going to happen and has something planned to take care of those bills. And you know what? He did. Just not in the way I thought he would 😉

Or perhaps I should say I feel God. After all, faith is like being blind. We can’t see what’s ahead of us or even around us. But in the dark I can feel God’s hand on my life and I can hear his voice. He won’t let me fall, not if I cling to him.

“Faith is the confidence that what we hope for will actually happen; it gives us assurance about things we cannot see.” Hebrews 11:1 (NLT)